Margravine Wilhelmine greatly influenced Bayreuth. Without her achievements, Bayreuth would not be the cultural and musical metropolis it is today.

In this infor­ma­tive animated film about Margra­vine Wilhel­mine, you will learn about her early years in Berlin and Potsdam, about her first impres­sions of the small town of Bayreuth, to which she became married, and about her crea­tive work. 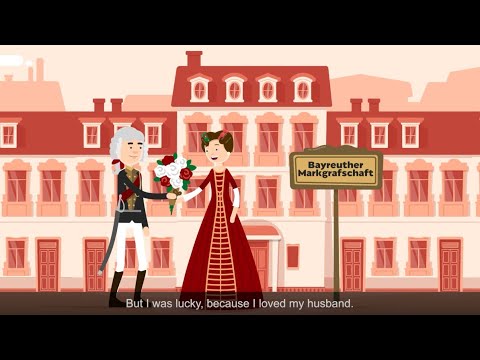 The life of Margra­vine Wilhelmine

In her younger years

Prin­cess – and later Margra­vine – Frie­de­rike Sophie Wilhel­mine was born on 3 July 1709, as the daughter of the soldier king Frede­rick William I of Prussia and his wife Sophie Doro­thea of the House of Hanover.

The young prin­cess grew up in an ambi­tioned house­hold. Her mother was pursuing a plan to make her the next queen of England. To achieve this goal, Wilhel­mine received a very compre­hen­sive educa­tion. In addi­tion to German, she learned French, English, Italian, Latin and Greek, and she could read the Bible in Hebrew. Further­more, she received lessons in music and art. She learned to play several instru­ments and thus disco­vered her great love of music and of compo­sing music.

Although she was perfectly prepared for the duties of a queen, their plan fell through after two decades. The English court did not agree to the marriage, and the disap­point­ment of mother and daughter was accor­dingly great.

As shocking as the news was, however, Wilhelmine’s father had already made a new plan. His eldest daughter was to take the heredi­tary prince of Bayreuth, Fried­rich, as her husband in order to tie the Fran­co­nian margra­viate more closely to their shared roots once more.

The prin­cess had mixed feelings about this decision: on the one hand, she considered herself very lucky, as she and her husband were bound by a close rela­ti­onship. At the same time, she perceived her arrival in the provin­cial city as a social degra­da­tion and was in shock on her first encounter with the simple life of the Margraviate.

Right from the start, the Prus­sian prin­cess missed the influence of French culture. The aris­to­crat spent her days at court with lite­ra­ture and music. She also atta­ched parti­cular importance to perfect manners, elegant dress and a strict sepa­ra­tion from people below her rank. She surrounded herself with a small courtly circle in whose society one was only allowed to speak to her in French.

Margra­vine Wilhel­mine grappled with her fate for a long time, as she had envi­sioned her life as a queen and not as the margra­vine of a small provin­cial town. In the end, however, she decided to shape Bayreuth, her new centre of life, for herself. Within two decades, she prac­ti­cally recreated Bayreuth and trans­formed it accor­ding to her own wishes.

A town in transition

For her 24th birthday, her husband gifted her the now world-famous Hermi­tage. The margra­vine imme­dia­tely began plan­ning the rede­sign and rede­ve­lo­p­ment of the park. Over the next few years, the land­scape park was trans­formed into a true gem. The Old Palace within the grounds was rede­si­gned and extended, and a New Palace with a Sun Temple was also built, as well as a ruined theatre in the park.

Wilhel­mine had deve­loped a taste for desig­ning and seized the oppor­tu­nity to design a new city resi­dence when the old buil­ding was almost comple­tely destroyed as a result of a fire. In a letter to her brother Frede­rick the Great, she wrote:

“I have indulged in the plea­sure of desig­ning the plan of my palace myself.”

She was parti­cu­larly drawn to the small details that became the hall­mark of the Bayreuth Rococo. The most impres­sive buil­ding that the Margra­vine worked on was the Margra­vial Opera House. The magni­fi­cent buil­ding was opened on the occa­sion of the wedding of her only daughter, Elisa­beth Frie­de­rike Sophie. Considered one of the best-preserved Baroque opera houses, it has been a UNESCO World Cultural Heri­tage Site since 2012.

On account of her love of music, her husband entrusted her with the direc­tor­ship of the court music in Bayreuth. Margra­vine Wilhel­mine was very passio­nate about the cultural life of Bayreuth’s court and in time estab­lished Italian opera there. Over the years, she succeeded in elevating Bayreuth‘s court cultu­rally and intellec­tually to the same level as the great courts in Berlin or Vienna.

The Margra­vine died in 1758 at the age of 49. After her death, her buil­dings in her resi­den­tial seat fell into a state of slumber.

Many years later, the composer Richard Wagner was looking for a suitable place to perform his operas and became aware of the disused opera house. When he visited the city with his wife Cosima in 1871, they both found the opera house too impo­sing for his works. Nevert­heless, they liked the city so much that Wagner decided to build the Fest­spiel­haus, his famous festival theatre, on the “Grüner Hügel”. Without Margra­vine Wilhelmine’s efforts to turn Bayreuth into a cultural hotspot, the Festival would perhaps be held else­where today.

Traces of the Margra­vine today

You can still find traces of the Margra­vine in modern Bayreuth. These days, the Hermi­tage is a popular place to escape the hustle and bustle of the city and take a leisu­rely evening stroll or visit the Old Palace with its magni­fi­cent rooms. During the warm months, the park asto­nishes with its colourful and varied flower­beds and water displays at the Upper Pond and in the Lower Grotto. But in autumn, too, the park is a sight to behold: the adja­cent deci­duous forest is trans­formed into a colourful sea of leaves.

A parti­cu­larly popular attrac­tion for visi­tors is a tour of the Margra­vial Opera House. On various guided tours, you can learn a lot of inte­res­ting infor­ma­tion about the cons­truc­tion and special features that the margra­vine had inte­grated into the building.

The margra­vine also left her mark on the area surroun­ding Bayreuth. The rock garden in Sans­pa­reil can be reached within 30 minutes by car and some infor­ma­tion boards there inform you about its history.

On the ground floor of the New Palace, a museum has been created dedi­cated to the margra­vine. Various gallery rooms, tempo­rary exhi­bi­tions and a small museum shop are waiting to be disco­vered. In addi­tion, various events revol­ving around the theme of the margraves in Bayreuth are held there. Themed tours with the Margra­vine herself enable you to take a cultural journey back in time through Bayreuth.